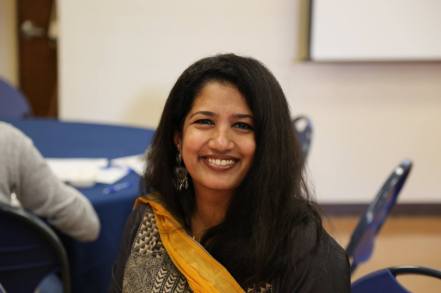 What is your story of strength? (What about you or your past makes you strong?)

I grew up in India, which is a very diverse country with so many states. Even though we are all Indian, I grew up in a different state than where I’m originally from, I am from south India but grew up in the north, so I was considered a minority. I remember when I was 6 years old, I was in a class of 30 kids and I was probably the only South Indian in the class.

Even though it was very diverse, the majority of the kids were from that state or Northern India. It sounds odd, but I was considered an outsider in many ways. I had to learn the local language, even though we all studied English and English was the medium of education. I was still different from the rest. There are small examples I can give you – my last name is Seethepalli. Because last names are so long in south India, I was called S.Aparna, so it was different and unique compared to what my friends and neighbors had. They would ask me, “what’s your surname?” and I’d say, “S” and they would say” what’s ‘S’?” I had to try to fit in, but at the same time I didn’t want to lose my roots. My parents spoke our native language at home, so I had to figure out a way to blend in with my new friends and community without losing my heritage and culture.

I think of myself as Indian first but living in the south was almost like being in a different country. I didn’t realize my identity was so closely tied to what state I was from. I had to learn a different language, the food we ate was different, and I was predominantly vegetarian in a non-vegetarian environment. I had to push myself. I had to prove myself on so many fronts. Without knowing it, I was being challenged to prove myself and I had to rely on my inner strength. I quickly realized that being a friendly person and blending in was easier than trying to fight and stand out. (even though I would stand out in my own ways)

I think that this is what made me strong. I lived there until I was 16, when my parents moved to another part of India. Just when I thought I got it all figured out – being a South Indian in Northern India – we moved to the southernmost part of India where, once again, I didn’t know the language. The first day of school I felt like a misfit all over again. I was now too “North” Indian, even though my roots were in the south! I had to learn to be south Indian again and studied hard to get into a good college.

What made me a strong person is the fact that I can relate to so many people, it doesn’t matter which part of the world you are from. I actually ended up learning 4 different languages. Even today, living in Silicon Valley, I have friends from different parts of India, and I will always speak to them in their language. By doing that, you build an unbreakable bond with people. They see you as one of them. This is what has made me who I am.

Can you tell me about a woman who you believe embodies strength?

That’s easy for me, it is my mother. This topic makes me quite emotional. My mother is now 76 years old. She was born in 1940, before India became an independent country. She came from a family of 7 kids where she was the eldest. She was from a generation where girls would get married when they are 20, have kids and not worry about making a living. A week before she turned 20, her father passed away. She was the eldest and her younger brother was 17 and was just beginning to enroll in an undergraduate college.  Her youngest sister was barely 3 years old. She had just graduated herself and could have chosen to get married, but she stepped up to take care of her family until her brother graduated. She chose not to get married until she was 26, which in her generation was rebellious.

I can’t even imagine how she did it. I couldn’t have done what she had done, even today. She worked as a door-to-door sales woman in the 1960s, selling laundry detergent. She would go around knocking on people’s doors demonstrating how to use the detergent. This was a job that no one in her family ever imagined doing, but she knew she had to help put food on the table. Her perspective was, “I’ll take any respectable job that I can.” She then got a job as a secretary in an office where she was literally the only female employee. She left home at 6 am, commuted for an hour and worked in an all-male office. She would not even go to the bathroom for the whole day because there was only one bathroom that was for men only. She owned 2 sarees. She would wear one and wash the other, every single day. Then she got a job teaching at a college, which was an important turning point for her. She is such a great influence and inspiration to me because of how she supported her mom, brothers and sisters who all ended up doing very well in life. I think she’s amazing.

Can you tell me about a time you failed or disappointed yourself?

I think I failed in some ways when I didn’t stick out my hand at work and say that I can take on more, or when I did, it was often too late. I was always trying to do what’s right for the company, but ended up failing myself in some ways because I didn’t ask for what I thought I deserved. There were not many women leaders in my field – business development and engineering. I felt like I had aspirations, but I wasn’t given the time and environment to fulfil them.

How can women better support each other?

Women should always identify talent in those who are younger or junior to them and encourage them. I think women in senior roles who have lived the difficulties of not having a proper mentor – male or female – should reach out and say, “hey, you seem to be really smart, this is what you should do and how you should improve yourself.” Offer to help and be there for them.

If a woman reaches out and asks for mentorship, never turn her down, because it requires a lot of courage to do that in the first place. If only for that, you should invest in that person. It doesn’t have to be formal, but enough to give them guidance and support in their own endeavours. It is so important also to be offered opportunities. I do believe you should get opportunities based on merit, not based on the fact that you’re a woman, but some opportunities are not even presented to women to pursue. It will always be ‘after the fact’ and you think, “I didn’t even know that I could have stuck my hand up.” To teach women to stick their hand up and support them in doing this- this is how we should support one another.